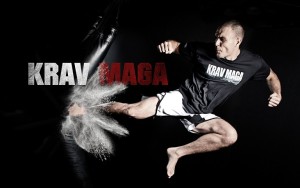 An Insight Into Krav Maga

Krav Maga is a style of self-defence first developed for the military in Israel in the 1940s. The words Krav Maga literally translate to mean ‘Contact Combat’ and it is seen as an aggressive style of fighting that turns very quickly from defence to offence.

In essence the idea of it is not to endlessly fight with one’s opponent or attacker until a victory is found, as is usually the case with many other styles of self-defence or martial arts. The aim in Krav Maga is more simply to absorb and deal with any initial attack that comes your way and then to produce an overwhelming counter-attack of a ferocious nature. Thus you either create an opportunity to be able to leave the vicinity of the attack very quickly, or in the case of a more serious and sustained attack, you bring about a fast end to the encounter by immobilising those doing the attacking.

Often in training there will be a sparring element and depending on the level of those doing the training and instructing, this could be one-on-one or multiple attackers focused on attacking an individual. Bringing together elements from many different styles of martial arts and street fighting, many see this as a more real-life scenario than traditional martial arts.

MMA or mixed martial arts, maybe a closer comparison to the training. However Krav is designed not only to breed the fighting skills, but also to develop a brain trained to assess dangerous situations, which enables those proficient to make quick judgements on the correct level of response required for each individual scenario. Such rapid assessments will include looking for exits and ultimately deciding the best way to bring about an end to the situation at hand.

If an attempted mugging was to take place on the street this could be where Krav Maga would hold you in good stead. For example if there was one mugger attacking one individual then often a short sharp response, either one or two punches or a punch and a kick might be all that is required in order to temporarily subdue the attacker and provide an opportunity for escape. Depending on the individual circumstances though this may require disarming the attacker before the opportunity to flee is created. If weapons are involved naturally things become more dangerous and complex, so during training a wide variety of weapon attacks are simulated which is again a big difference from other self-defence classes.

On from that, however, if the attack is by multiple attackers then one or two punches alone may not be sufficient to provide the same opportunity for the quick getaway. In which case, it might be necessary to subdue each individual to a greater extent. Be that by attacking certain weak points, i.e. usually the joints… wrists, elbows, shoulders, knees, even focusing on an attackers eyes or throat in extreme circumstances, in order to make sure that follow up attacks are less likely.

The style of response is further adapted if it is not only yourself who is attacked, as you may have people with you who are less able to defend themselves. Be that your boyfriend, your girlfriend, your children, your parents and so on. In which case thought has to be given to their protection at the same time as dealing with the attacks and in this scenario rapid escape may not be so readily available.

For those who undertake training in Krav Maga, an added benefit is that because of the many different elements that can take place in any given training session a great by-product of this is how good a method of fitness training it quickly becomes.

So, if this leaves you curious then find a class local to you. More and more are springing up all the time as it is a very fast growing form of self-defence. And you will often find ‘taster’ sessions are available to give you some idea of whether or not it will be what you seek for your defence and fitness needs.